JAVY News | Ge Youshan, executive director, was interviewed by the media to interpret the specific application of the food safety law

In summer, people prefer cold dishes, and "shooting cucumbers" is a favorite of many people. However, a few days ago, many restaurants were fined for shooting cucumbers, and the number is not small. In late July, many restaurants in Hefei were fined for selling cold dishes without obtaining the qualification of cold food business. Among them, several stores were fined 5000 yuan for selling cold cucumber on the takeout platform without qualification. Recently, lawyer Ge Youshan, executive director and founding partner of JAVY law firm, was interviewed by Beijing Radio and television 1039 News Morning Post to give a detailed interpretation of this incident.

A fine of $5000 is not a small sum for a commercial tenant. Because the illegal income of these businesses is only more than 200 yuan, and less than a dozen yuan. Compared with the amount of illegal income, the lighter penalty is dozens or even hundreds of times. This has aroused people's attention and discussion. Is this strict law enforcement? Or is it too hard?

Friends who do not operate catering enterprises may not know much. Our country has very strict requirements on food hygiene. Take one of the shops involved as an example. This shop has a business license and a food business license, but the licensed items in the food business license do not include the production and sale of cold food. Therefore, the party concerned operated cold dishes on the online platform without permission, which violated the measures for the investigation and punishment of illegal acts of online food safety, constituted an illegal act of operating cold food without permission, and was punished by the market supervision department. 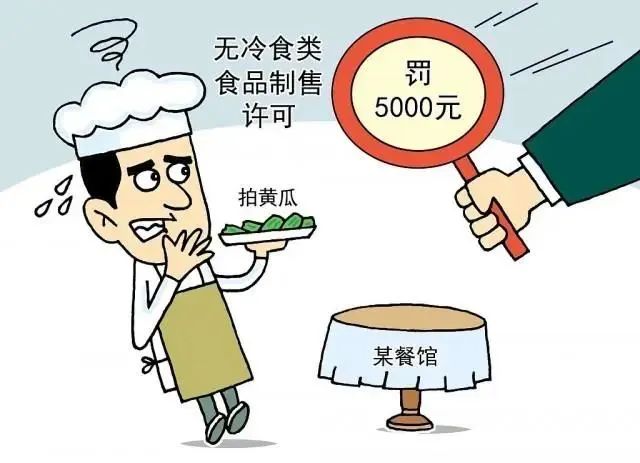 Relevant laws and regulations have high requirements on the processing and operation of cold food. The strict restriction of processing space not only shows the attitude towards food safety, but also shows the particularity of cold food. Based on the "food hygiene law", all regions also have clear local regulations on catering enterprises and food production enterprises. Lawyer Ge Youshan, executive director and founding partner, introduced:

Therefore, during the implementation of the food safety law in different regions, there may be corresponding local standards. During the implementation of this standard by the market supervision and administration department, especially in specific cases, the punishment results may also be different according to the differences in the illegal circumstances, harmful consequences and profit amount of each case. However, the enforcement should be carried out in accordance with the working rules and detailed rules published by the government departments.

Some experts said that there is nothing wrong with strict law enforcement, and the effect of humanized law enforcement may be better. The punishment case caused by shooting cucumbers seems to be a trivial matter. In fact, it will more reflect the wisdom and temperature of administrative law enforcement. After all, prevention is the primary purpose. In addition to legality, rationality is also necessary to follow the administrative punishment. Considering the requirements of the administrative department for "releasing control and service", the case of "illegal operation and shooting cucumbers" can actually be handled in a more effective way.

Food safety is nothing trivial. Punishment can be used to promote reform, but it cannot be used as a substitute. The regulatory authorities should strengthen the food safety management and improve the food safety standardization level of the catering industry. Only in this way can the number of surprising cases of "shooting cucumbers" be reduced and the red line of food safety be better maintained.